The Zervas-Kyriazis fish farm grows seabass in cages at sea in Livanates at the aegian coast. To establish a clear view of the situation, a monitoring program of oxygen levels was carried out in 2012/2013. A sea cage of 13-m diameter and 8-m deep was stocked with 20,000 seabass, each 550 g, giving a biomass of 11 metric tonnes, and stocking density of 11 kg/m3. Oxygen sensors were placed outside and inside the cage at 3-m depth. In addition, a water velocity sensor was installed at the site.

Measurements done in November 2012 show lowest oxygen levels during time after feeding. The fish were hand fed only at the morning hours from 8 a.m. to noon. In some days, the saturation levels of oxygen went below 40%. (Fig. 1). The critical levels were most probably caused by slow water currents (Fig. 2). 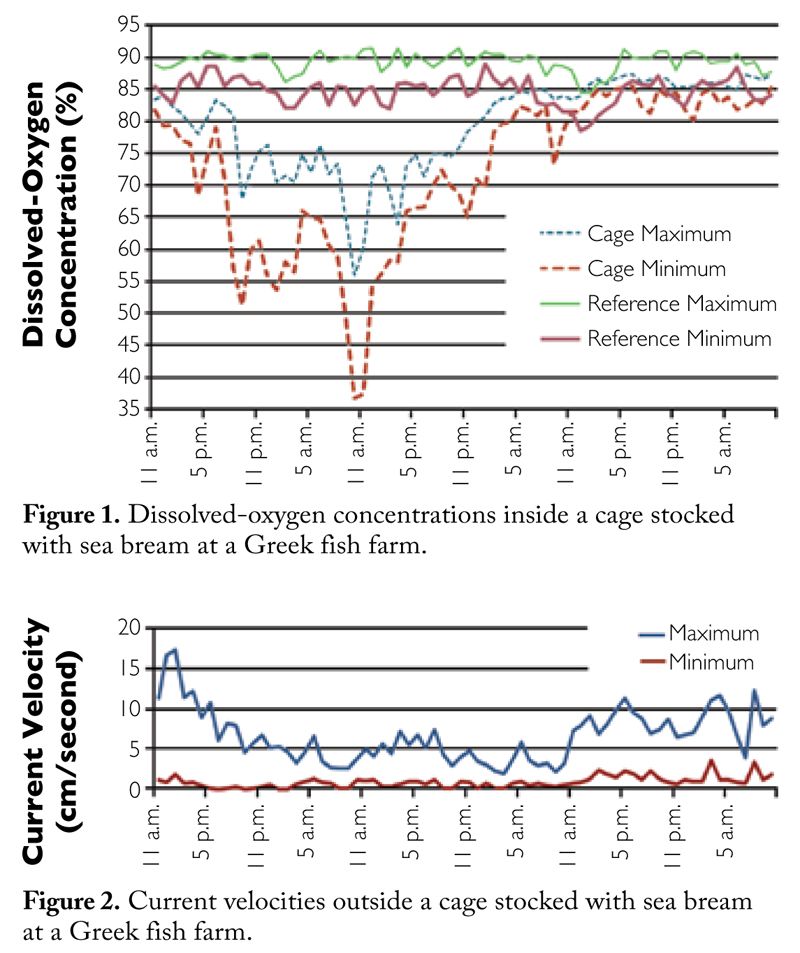 Even though water temperatures were no higher than 20° C, these measurements show how vulnerable the situation may get. During late summer water temperatures may rise to 30° C, and oxygen availability will be both a health risk as well a factor limiting efficiency.

Whereas aeration is widely practices and considered vital in many land-based and pond farms, traditional sea cage culture the supply of oxygen is solely based  on natural water exchange. However aeration and oxygenation is widely used in fish cages during medical treatment and when fish are constrained before harvest.

To study the cost and benefit of aeration during regular operation the AirX has recently been installed for a closer evaluation at the Zervas-Kyriazis fish farm. Parameters, such as dissolved oxygen and total gas pressure in the water column are routinely monitored. The performance of the fish stock (FCR, SGR etc.), will be balanced against the costs of the aeration attempt (kg O2/kWh, kWh/kg fish prod.), and time to return on investment will be assessed when trials are finalized in the end of 2014.